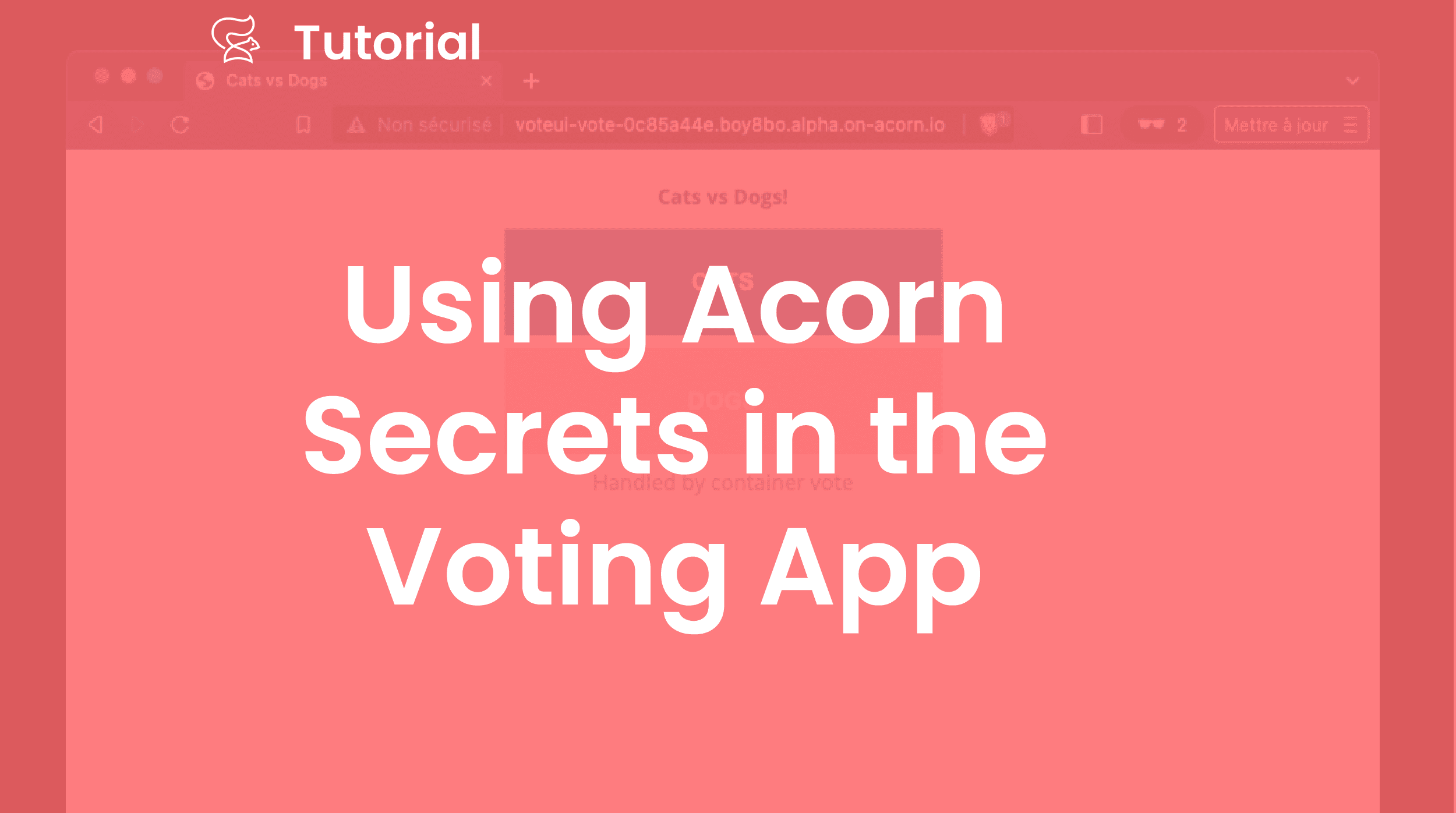 In the previous article of the series we described the Voting App in an Acornfile and ran it in a demo cluster. As a reminder, we ended up with the following Acornfile:

If you look at how the username and password are provided to the db container, and to the other containers that need to connect to it, you’ll notice this is not clean nor secure because those credentials are in plain text in each container. In this post we will see how to improve the Acornfile by making it more secure with Acorn secrets.

To secure sensitive pieces of information we can use Acorn secrets, they are several types of secrets available:

In the following we will use a secret of type Basic as this one handles simple username and password information.

Feel free to browse the documentation to get more information regarding the different types of secrets and how to use each of them.

Adding a secrets in the Acornfile

First we can add a top level secrets key in our Acornfile as follows. It defines a secret named pg-creds, of type basic, with the value postgres set for both the username and password properties.

Next, we reference the secret’s username and password into the worker, db and result containers. To do so we use the following syntax :

For instance, the new definition of the db container is as follows (the same changes need be done for the worker and result containers):

The Acornfile is slightly better now because the secret is defined once and then referenced in the containers which need it. But, the credentials are still in plain text in the definition of the secret, which is what we’d like to avoid.

Secrets of type Basic or Token have a special feature which allows the auto generation of values in case they are not provided. From the VotingApp perspective we need to define credentials for the db container and make sure both worker and result containers can connect to it, but we don’t need to have access to those credentials externally. In the definition of the secret we can then empty both username and password:

The new version of the Acornfile now looks as follows:

We can run the app using this Acornfile:

Using the http endpoint returned for both vote-ui and result-ui we can access the application and vote for our favorite pet as we’ve done in the first post post of the series.

Under the hood we could see that a new Kubernetes namespace has been created and the application is running inside this one. Within this same namespace we would also get the db-creds secret that is now part of the application.

In this part we have defined the secret directly in the Acornfile but there are cases where we want to create a secret externally, this is what we will explore in the next part.

Managing secrets from the command line

Using the following command we can get the list of actions we can perform on secrets from the cli:

First we create a secret named postgres-credential, of type basic, which contains 2 keys (username and password) and the associated values:

This command provides an output similar to the one below.

Once created we can easily retrieve the values:

As we can see, nothing prevents us from retrieving the values of the secret in plain text once it is created:

Acorn added an encryption feature in the latest release thus making it possible to encrypt a secret. Let’s then encrypt the postgres-credentials secret:

We will be returned the encrypted version as follow (note the ACORNENC string at the beginning):

Behind the hood, the encryption is done using the cluster’s public key which can be obtained with the following command:

This provide an output similar to that one, the encryption key being defined under the .namespace.publicKeys.keyID property:

We can now run the application and make sure it uses the external postgres-credentials secret with the following command:

As we’ve done previously we could verify the app is working fine and then vote for our favorite pet.

In the next article of the series we will build on this example and use the acorn volumes to add persistent storage to both databases.

Luc Juggery is a software engineer with 18+ years of experience and co-founder of 2 startups located in Sophia-Antipolis, southern France. You can chat with him on Twitter, read more of his work on Medium, find his tutorials on YouTube, or take one of his Docker or Kubernetes training courses on Udemy.